A folding arm awning is an awning that folds out and has an arm that extends out to support the awning during its use but folds away again when in the stowed position. When away, a folding arm awning can be placed into a cassette. This is the box that houses and protects the awning from the weather such as the harsh summer sun or the driving winter rains and cold temperatures. 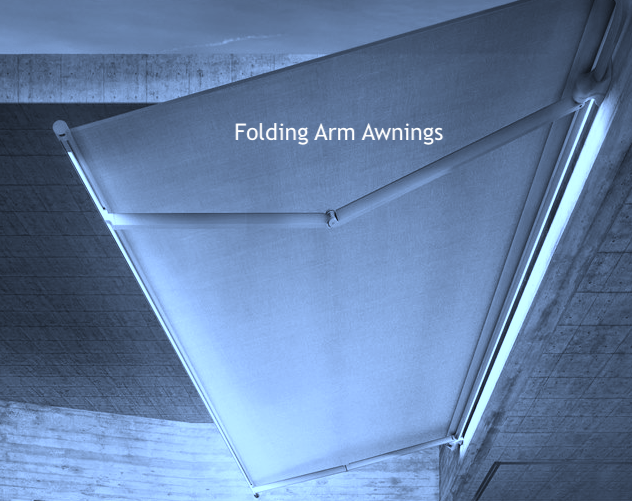 Standard: The folding arm awning does not fold into any form of housing or protective case. The awning simply folds in on itself in the stowed position.

Semi Cassette: As the name suggests, a semi cassette folding arm awning is a half box that houses the awning in the away position. This generally sits at the top of the awning and is also the place from which the awning folds out.

Full Cassette: A full cassette awning option is one where a case fully encloses the awning. This ensures the maximum amount of protection for the awning, the arms and the mechanisms from the sun as well as water which could negatively impact the awning and its functioning.

As can be seen, there are three types of finishes for folding arm awnings when in their away position, each of which has its unique features. These are standard, semi cassette and full cassette. Each of these needs to be considered on their merits when deciding which is best suited to your purpose. Keep in mind that standard folding arm awnings will have weather protection if they have some type of shelter above them. To learn more about blinds and awnings always contact a trusted professional service in your local area.